Boats and ferries can travel between countries, or between ports in different cities. There are many different types of boats and ferries. Train ferries can carry railway cars on the boats. These are used when there is a need to carry a train between two railways. Car ferries are used to connect roads across bodies of water. This is sometimes a shortcut instead of driving around a large lake or parts of the ocean. Passenger ferries can be used to transport people for pleasure or sightseeing, or on a cruise or to commute to work. Boats can be used for fishing as well. You can also take a boat from a smaller town to a bigger city. Some people take boats to work or to school everyday. 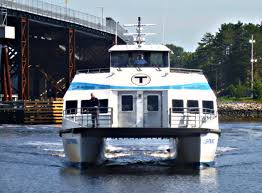